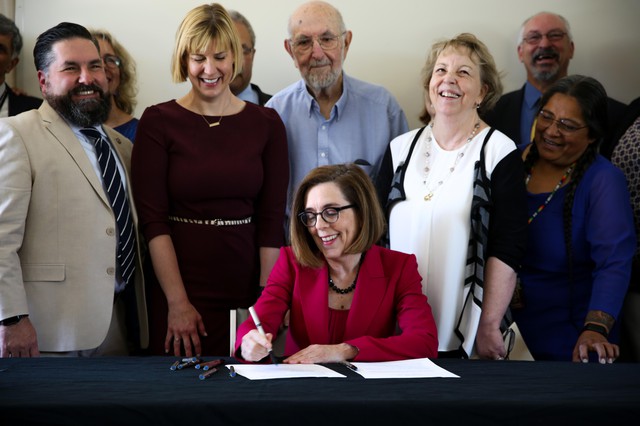 Oregon Gov. Kate Brown signed legislation Monday to alter sentencing requirements for young offenders, which advocates are calling the most significant reform to hit the state’s juvenile justice system in a quarter-century.

The law reverses tough-on-crime sentencing rules adopted in 1994. It means a judge will be able to decide if a juvenile 15 years of age and older should be tried as an adult for serious crimes like murder and kidnapping. Young offenders will also be eligible for a parole hearing after serving half their sentence.

Similar legislation has been in the pipeline for at least a decade. State Rep. Jennifer Williamson, D-Portland, who carried the bill on the House floor, says lawmakers tried and failed to push through juvenile sentencing reform in 2013.

They succeeded this year, Williamson says, in large part due to state Sen. Jackie Winters, R-Salem, who was able to rally Republican support for the measure.

Winters died in May after a two-year-long battle with lung cancer. Her death came one week after the legislature passed the sentencing reform bill.

“We are here today because of one Republican,” says Williamson. “Jackie Winters is why we’re standing here.”

Monday’s bill signing served as an opportunity for legislators and advocates to honor the work of the veteran lawmaker, remembered by her colleagues as an impassioned champion for criminal justice reform.

In a teary speech, Winters’ daughter-in-law and chief-of staff Pam McClain says that this bill was one of the few items that remained on Winters’ legislative bucket list at age 82.

Monday’s bill signing almost did not happen — at least not in a community center in North Portland with more than 50 community activists and stakeholders looking on. Brown said, when the bill passed in May, she “immediately emailed Mrs. Winters to let her know I would literally bring the original bill to her and sign it in her presence.”

Winters declined to have the bill signed by her bedside, stressing that the event should be witnessed by voters.

“The email I got back was: ‘’This was very much a public process,’” Brown recalls. “And she wanted everyone to be part of this bill singing.”